From time to time.

Through the previous workshops, by sharing artistic and scientific research practices, disagreeing and misunderstanding each other, we have identified not only a diversity of metaphors, but also a diversity of uses of metaphors, and even of meanings of the term “metaphor”. Metaphors can be used to explore, teach, create new perspectives, describe, argue, question, etc... Metaphors can be restricted to a linguistic form that relies on analogy, but more broadly, they can also be visual, plastic, etc. As put by Gray & Macready (2004), “the metaphor borrows language, symbols, logic, and associations from one field and imposes them upon another to which they do not properly belong.” Some meanings of “metaphor” are even more extended, such as the “root metaphor” that refers to the “underlying view that shapes an individual's understanding of a situation” (wikipedia). In this case, “[the] metaphor is pervasive in everyday life, not just in language but in thought and action.” (Lakoff and Johnson, metaphors we live by. 1980). It also governs our concepts structure, what we perceive, how we get around the world, how we relate to other people, how we conceive our research. As such, metaphors carry a sort of ideology – though to very different extents –, including values, economical, social and political structures, expectations, etc. This ideology itself depends on the cultural context in which metaphors are used.

In the upcoming workshop, we aim to prolong this work, both in terms of exploring new metaphors, and questioning how existing metaphors influence our practices. The previous workshop addressed the topic of collective behaviors. This led us in the current workshop to question the notion of process, and more specifically how our notions of time, the metaphors we use to describe time, impact our practice of research and creativity: when does a process, an action, a behavior begin or end ? What do we consider as the beginning or the end?

When do I start to throw a ball? When it leaves my hand? When I hear my sister say, “you’ll never hit that!” When I aim? When does it hit? To some degree we are still living the moment that the Duke Ferdinand was hit, that Kennedy, that Rabin. Or is it the moment after? This underlies a more general issue with all the moments in a process, with our metaphorical Now. What is now? I am here now, writing this sentence now, this essay now. How long does now take? When does it start and end? In Hebrew when asked how long something will take you can say “rega” a moment and one person’s rega can quite often be another person’s lifetime. For the living, two nows are more defined than others moments: birth and death. There was clearly a moment before I existed (or you, or your cat or a bacteria) and there will be a moment when you are no more (or I or Castro or Prince). But there too mostly they are ill defined in reality. When were you born? At conception? And your twin? When you left the womb? Did you die when you stopped dancing? When the bullet left the gun? When your body cooled? When the famous story became unknown?

Living processes, especially cognitive ones, seem different from processes of inanimate objects. A rock rolls down the hill, a gas diffuses in the room moving predictably without any history beyond the moment before or after. In a living system not only are the different “nows” interspersed, they are also influenced by memory and context. Living processes are cushioned by metaphors of past images and future possibilities.

To ascertain when an aesthetic experience begins or ends is another unsolvable question, especially since the definition of art enlarged itself so much that it’s no longer distinguishable from life itself. Applying not only to a wide range of mediums, the notion of process also defines each and every steps of the artwork existence from the original explorations to its reception by the public. It has thus turned to be such a diffuse notion that it has apparently become inefficient to properly describe what it intends to qualify; to such an extent that one can wonder whether the goal of the process has become the process itself.

To investigate further these questions, the workshop will make room for sharing, experiencing and experimenting our respective research practices. 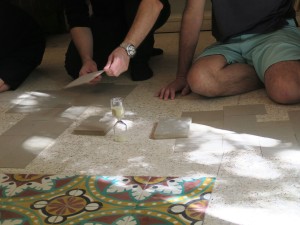